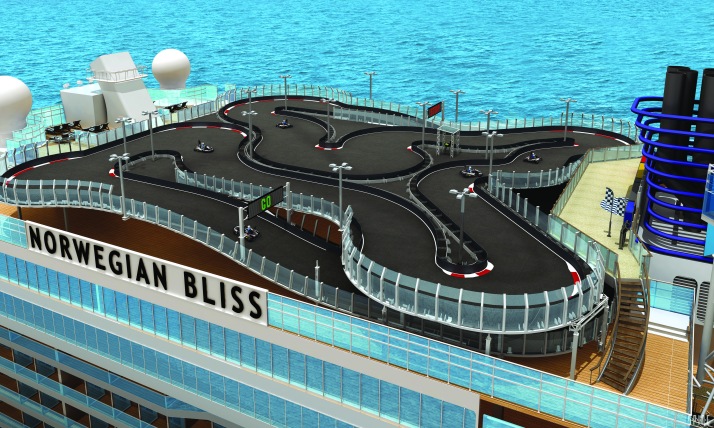 Norwegian Cruise Line’s new ship will have the longest race track at sea, it was announced today.

A circuit of the two-level course on Norwegian Bliss will be nearly 1,000 feet – beating sister ship Norwegian Joy, which launched the concept in April. Guests driving silent electric cars will be able to race each other at up to 30mph, with a special ‘turbo boost’ available on each lap.

An open-air laser tag area, themed as an abandoned space station, was among other features announced in Las Vegas by NCL president Andy Stuart, who said: ‘Norwegian Bliss will, no doubt, be our most incredible ship to date. We have elevated the onboard experience to new heights.’

There will be two multi-storey waterslides – Ocean Loops freefall will include two loops, one extending over the side of the ship and a second see-through one that stretches to the deck below. The tandem Aqua Racer lets guests race side-by-side on inner tubes for more than 360 feet with a clear section providing stunning ocean views. 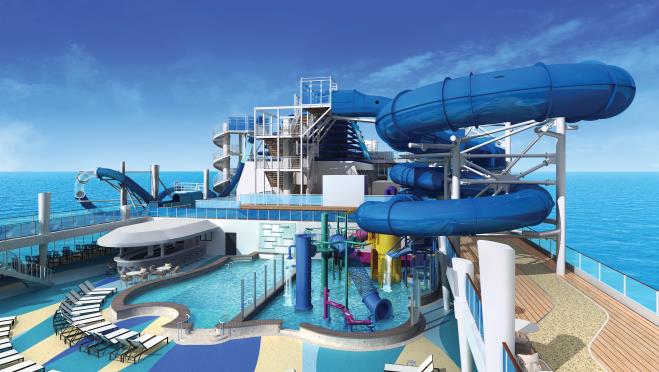 As well as two pools, Bliss will have six infinity hot tubs at the side of the ship.

Among the dining options will be the all-new Texas smokehouse Q, serving barbecue food. A complimentary venue called The Local will serve pub fare 24 hours a day, while The District Brew House will have 24 beers on tap. Coffee lovers will be able to pop into a full-service Starbucks, in a nod to the ship’s homeport of Seattle.

Entertainment will include the Jersey Boys musical.

Bliss, the company’s 16th ship, will start sailing weekly Alaskan cruises in June 2018 from Seattle’s Pier 66 before heading to the Caribbean in November.

The 167,800-ton giant, being constructed at Meyer Werft shipyard in Papenburg, Germany, will hold 4,000 passengers. Sister ship Norwegian Joy is based in China.

Two Ships in Two Days -- A Study in Contrasts

Norovirus and Cruising. What You Need To Know!

Whether you need an unforgettable Alaskan adventure-- a luxury private villa rental – a custom group cruise event – or just a fun Caribbean cruise getaway – Pat and Kevin can help you plan a vacation, complete with lifetime memories. After all, at Dancing Moon Travel, We Choreograph Dreams!